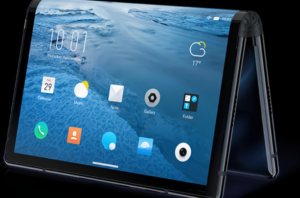 The smartphone giant has recently added some photos on social media like Facebook and Twitter with a pics of a foldable something logo which is the hint of the upcoming foldable Samsung mobile in upcoming weeks.

This is the “world’s first foldable screen phone” released by Rouyu Technology, which will use the Snapdragon 8150 processor, but its design is very rough, just to seize the “first”, this is a futures product. pic.twitter.com/M0v9o2z0Bw

Some information about upcoming Samsung foldable mobile leaked according to this information mobile phone features maybe:

Other mobiles like LG , Xiaomi and Lenovo also coming with a foldable devices next year.

According to some reports Samsung is going to work with Google for special Android vision devices if this type of agreement will work then they will produce smartphone in tablet industries with its dual features of having a tablet and mobile phone features.

According to some reports upcoming Galaxy F price will be  $2,000 with the internal storage of 512GB. It will be 7 inch AMOLED display and a huge battery.