Hollywood superstar Chris Hemsworth aka thor the greatest Avenger is in India this day enjoying a lots of movement around Indian fans thank the country of having a so much love and welcome informally.

Chris Hemsworth aka thor is the one of the avenger in Hollywood movie who will be appear in Avenger 4.

Beyond thankful for the kindness and generosity that people of India has extended to us making our little film here. 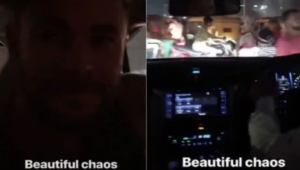